(Originally published May 2020 for the Cleveland Stater student newspaper)

The graduating class of 2020, whether from high school or college, has had nothing short of a tumultuous ride over the past few months as they have had to face the physical and emotional challenges of completing their education virtually due to stay-at-home orders across the country.

For many, having a full course load of online classes was a first. For Cleveland State spring graduates, they are about to experience yet another new undertaking – a virtual commencement ceremony.

Following the university’s announcement of its first virtual commencement to be held on May 30 at 1p.m., graduates found themselves with something to look forward to, since an in-person commencement had been previously postponed until university officials are safely able to organize one.

Cleveland State senior Katie Turocy will be finishing her double major in psychology and health sciences on the pre-occupational therapy track, and she said that while she wishes commencement could be held as normal, she understands that a virtual ceremony is in the best interest for everyone.

“I am disappointed that the current circumstances led to commencement being online. However, I think it is the best-case scenario,” she said. “I would not want to risk my family, friends, or my own health by having a ceremony. I think the online commencement could be put together really well.”

Turocy plans to continue at Cleveland State for graduate school, and said she feels blessed that she will at least be able to experience another commencement ceremony down the line. As far as this year’s ceremony goes, she said that if the school is able to organize an in-person commencement exclusively for spring graduates she would certainly attend, but if her class is combined with future fall graduates she would not feel obligated.

For some, the validation of being able to eventually walk the stage is still essential. Crystal Beaulieu, graduating from the journalism program, said she is both excited and curious to see what the virtual commencement has in store – but not quite sure what to expect. She has eagerly anticipated the chance to ‘walk’ for a long time, not just for the thunderous applause, but for the deep symbolism it holds for herself and her family.

“It's very important for me to walk the stage. As a non-traditional college student and first-generation college graduate, it has taken me over 15 years to earn my bachelor's degree. Now in my mid-30s, I realize the importance of this accomplishment and the grit it took for me to actually graduate,” she said. “My children have watched me struggle and work hard to earn this, and they themselves have had to sacrifice time with their mom as I worked through my courses. Walking the stage would give me the gratification of all my hard work and would give my family the pride of knowing the support they've given me was just what I needed.”

Justin Rosenbaum, 23, graduated from Cleveland State last May under much more normal circumstances, however, he said thinks the idea of a virtual ceremony is a commendable effort upon the part of the university to still honor graduates during unprecedented circumstances.

“As far as pulling it off effectively, I think the school can figure out an appropriate format for families to tune in and students to feel some sort of closure with their graduation,” Rosenbaum said.

He said he wanted to encourage this year’s graduates to focus on their achievements, despite how challenging the conditions around them may be.

“I would tell them the important part is that they were able to graduate. It could have been a situation that was so bad that they couldn’t even finish school,” Rosenbaum said. “So as bad as it may sound in the moment, the important thing is that they graduated and received their degree.”

Going to college can be a daunting experience – between the tuition, tests and pressures to succeed, many students step away, or worse, think they cannot attend at all.
But State Representative Bride Rose Sweeney, 27, a graduate of John Carroll University several years ago, knows the plight of a typical college student, and is pushing for changes to make their lives at least a little bit easier.
Rep. Sweeney (D-Cleveland) along with Rep. Niraj Antani (R-Miamisburg) recently introduced a bipartisan bill to eliminate sales taxes on college textbooks.
Rep. Sweeney said that she was excited about the recent successful elimination of the pink tax (the tax on feminine hygiene products) and it made herself and other legislators continue considering what other demographics could benefit from certain tax breaks.
“This came, which I think is really cool, with another state legislator Naraj Antani. We're two of the youngest people in the general assembly and he is very, very far right,” Rep. Sweeney said. “And it's cool that, being some of the youngest people that are recent graduates from college, [we’re] coming together and saying, ‘okay, what can we do?’ We did just get more money in the budget to hopefully lower costs of tuition, but there's other things we can do.”
She said that she feels the responsibility to speak on behalf of college students and address the student debt crisis rests on the younger members of the general assembly, so introducing the bill to eliminate taxes on textbooks is both a good way to raise awareness and put some money back in the pockets of students.
Reps. Sweeney and Antani have looked over what the raw numbers would look like if the bill goes through, and Sweeney said that she thinks the benefit for students outweighs the relatively minimal hit the state budget would take from cutting that tax.
“We have a $70 billion budget, so this is a few million dollars. So, I think we just keep educating and putting it in those contexts,” Rep. Sweeney said. “You know, unfortunately the average age of the general assembly is – this is just me ballparking, around 50 years old. And so, the people that are in there [are those] who've been making these decisions on higher education. I’ve talked to people and it's just not a priority for them – and I ask about the student loan crisis, and I've had actual members of the general assembly say it's not a crisis. Like it's not a real thing.”
Rep. Sweeney said that she knows how challenging it can be for anyone to join the workforce without a degree, since many entry level jobs require one, so she commends students who brave the hurdles that college poses to reach their goals. She said she wants to contribute any way she can to lessen those barriers, even if it is just helping students save some money whenever they buy a textbook.
“It's a very small break, but you know, when you look at it, it's millions of dollars that the state … taxes on these books, when I think it could be better used in the hands of students.”

CAB Kicks Off Fall with a Foam Drop
By Sheena Holland
A typical Thursday evening at Cleveland State consists of students strolling to night classes, having dinner at Chili’s, or trying to catch up on homework that has piled up over the week – or occasionally getting blasted by foam cannons.

The front lawn of the Music and Communication Building transformed into a dance floor made of bubbles on Sept. 19 as the Campus Activities Board hosted Cleveland State’s first Foam Drop event.
The Foam Drop had many elements of a traditional dance party, complete with an energetic DJ on a stage, a fog machine and heavy-duty speakers playing classic pop hits that could be heard well down Euclid Avenue. However, the defining feature of this event was that students who came near the stage were up to their knees – and sometimes higher – in foam bubbles.

Glowrage also does paint parties along with foam ones, but Pavey wanted to bring an event to campus that was different than anything CAB had done before.

“We have had sort of similar things on campus such as Holi, which is the powder party, and a couple years ago we did a paint party, but I had never seen something like foam,” Pavey said. “I thought it’d be something a little bit different, and it kind of looked fun from the picture. So, I wanted to give it a try and see how students responded to it.”

According to Pavey, they responded quite well. She had hit her goal in attendance before the sun even went down.

CAB also provided Mitchell’s ice cream for attendees and set up various other games around the lawn such as inflatable Twister, giant Jenga, and Connect Four. 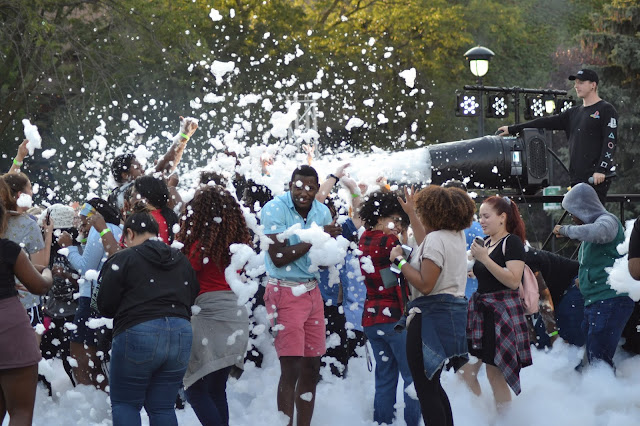 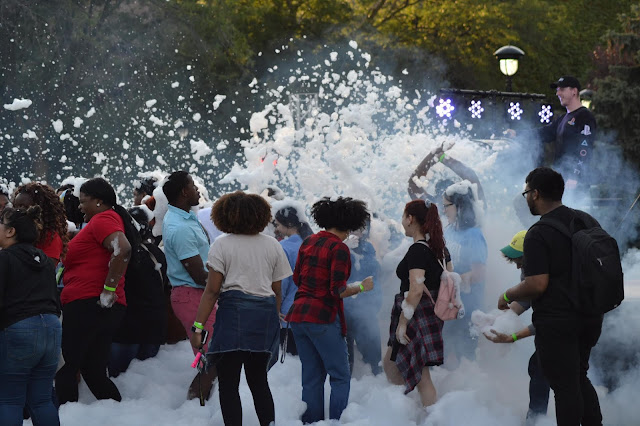 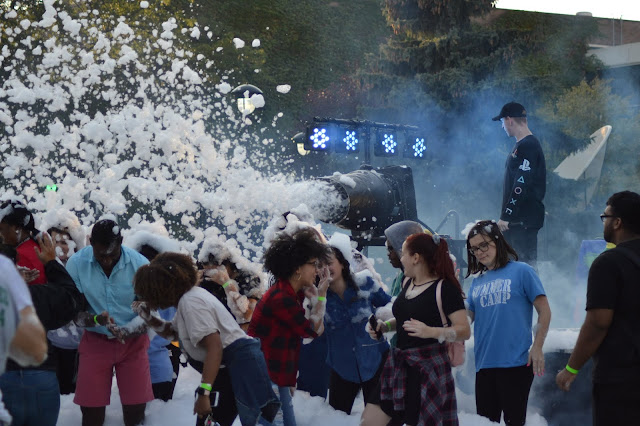 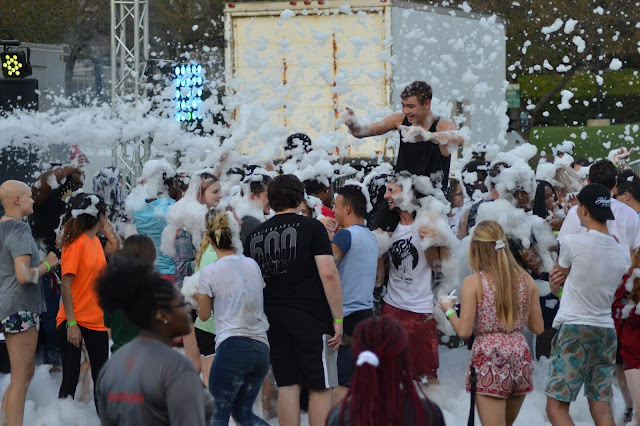 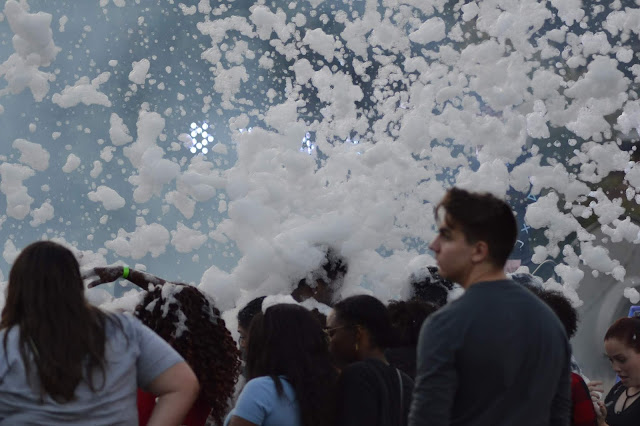 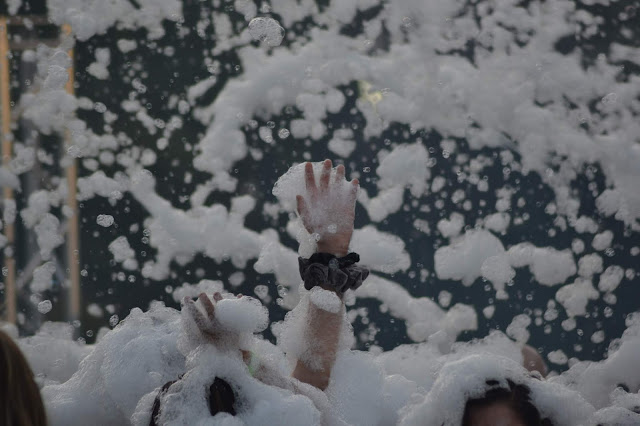 Thanks to Autumn for letting me stick her in front of a camera for this fun little interview!
(And undercut design, of course.)

A Morning at Windhorse Farms


Listen to my interview with Ellie below, where we chat about her horse experience and what makes Phoenix special:
https://soundcloud.com/sholland2515/ellie-and-phoenix

For perspective, some pet ownership statistics from data gathered by the American Veterinary Medical Association (AVMA) in 2012:

It turns out that dogs can be just as expensive as horses on average when it comes to vet bills: 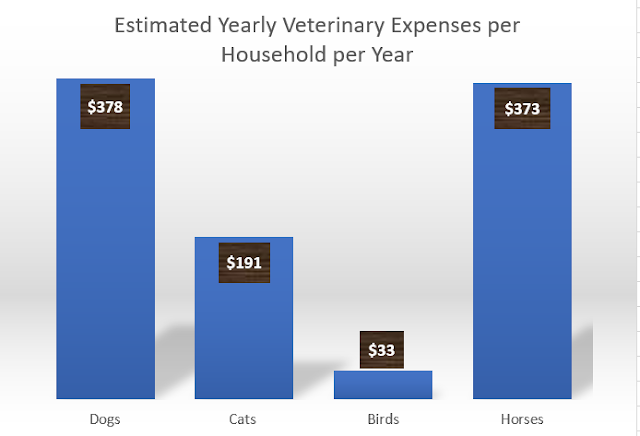 Data from: https://www.avma.org/KB/Resources/Statistics/Pages/Market-research-statistics-US-pet-ownership.aspx#companion
at March 29, 2019 No comments:

We take an overall look at the types of students that comprised CSU's enrollment in 2017: 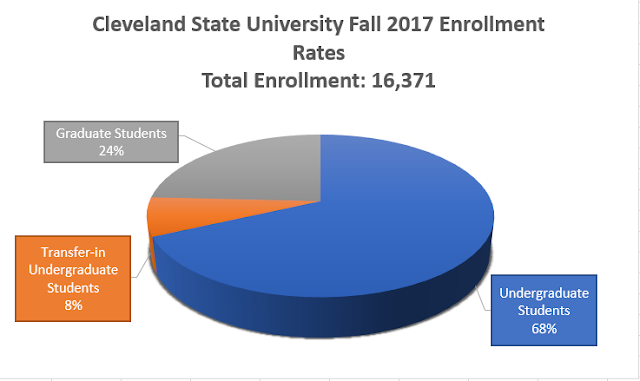 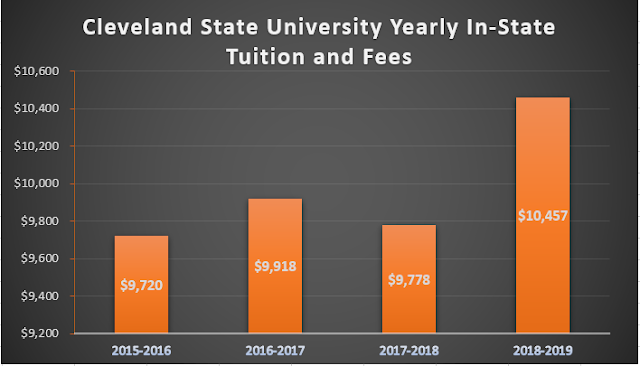 Sheenanigans Radio: A Chat about Tattoos 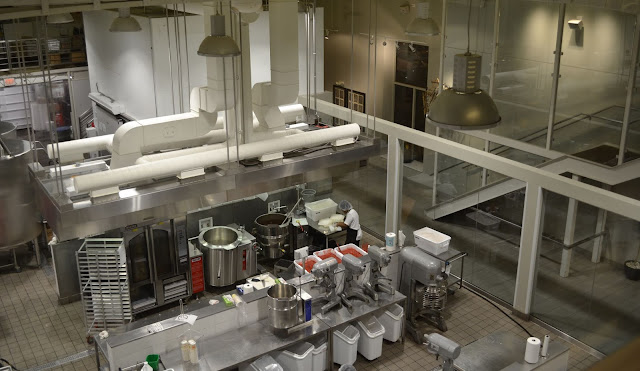 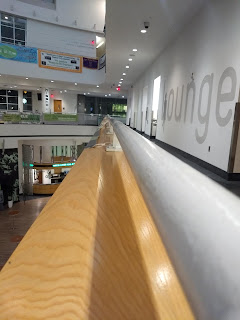 (Originally published May 2020 for the Cleveland Stater student newspaper) The graduating class of 2020, whether from high school or college...